I am running for Mayor to solve New York City's homelessness problem and to begin solving affordable housing problem. I am registered with New York City Campaign Finance Board as a write-in candidate.

In accordance with campaign finance rules, contributions must include donor's name and address, and for contributions over $99, employment information. Contribution limit is $4950, or $400 for those listed in Campaign Finance Board's database of individuals who do business with the City of New York. Contributions are accepted from individuals, but not from corporate entities such as LLC / LLP / Inc. / Ltd. Please refer to New York City Campaign Finance Board for details.

I don't intend to actively tweet as Mayor (isn't it nice to have an elected official once in a while who doesn't tweet?) and will use Twitter primarily for messaging. Anyone can send me a message, whether business-related or personal, at

but I do not guarantee a reply, and may not be able to always read all messages. Please note that if you want to receive direct messages FROM me, you need to whether follow me or to set up your Twitter account to receive messages from anyone. 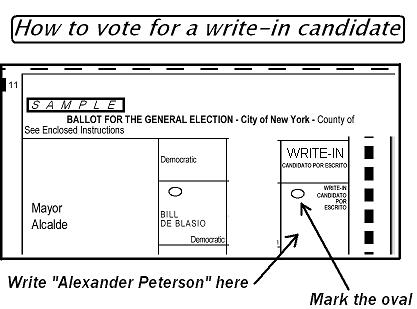 The 2017 mayoral election is over, and nothing changed. The war on the homeless will continue for another four years.
I'll have to make an adjustment to some of my views. I knew people didn't care about the homeless, but I'm afraid I didn't realize to what extent.
During the campaign, I gave this Web address to Coalition for the Homeless and to a number of people I knew, and placed an ad in AM New York newspaper (it costs a fortune to run an ad like that even for one day).
In total, only about fifty people viewed this site. Nobody ever contributed anything, sent any messages, shared this Web site with others, or acknowledged reading it.
There are animal abuse laws on the books which can send people to jail for a year. Wherever animals are utilized by people (in horse carriage industry, for example), animal rights activists appear and claim that the animals are "exploited". There are demonstrations, lawsuits, and TV coverage. I can only imagine what would happen if animal rights activists found out that horses are systematically deprived of sleep in their stables. But when somebody writes on a Web site that homeless people are systematically deprived of sleep, which, according to the government, is a form of torture, people don't even acknowledge reading it. People knew that all along. That's how they want it.